Return to About Us

Accompanist for A Joyful Noise – monday choir, Ariane Lowrey was born and raised in the Smoky River Region of Alberta,  received her Bachelor of Music Degree in piano performance at the University of Alberta in 2003, studying with Ayako Tsuruta and Janet Scott Hoyt. In the summers of 2001 and 2002, she attended the Summer Festival at the Orford Art Centre in Quebec, studying with piano professors Jean-Paul Sevilla, Jean Saulnier, and Richard Raymond. After completing her undergraduate degree, Ariane studied at the Université de Montréal with Paul Stewart and completed her Master of Music degree in piano performance in 2005. She then traveled and worked in the UK and Europe before returning to Edmonton in 2007.

Ariane is actively involved in accompanying and collaborative work as well as teaching and adjudicating. She has performed with various chamber groups, choirs, vocalists, solo instrumentalists, dance and musical theatre productions in both Edmonton and Montreal. Her first foray into choral music (both as a singer and accompanist) was with the University of Alberta’s Concert Choir, under the direction of Dr. Debra Cairns. She then went on to accompany i Coristi Chamber Choir (also under the direction of Dr. Debra Cairns), the King’s University College Concert Choir with Dr. Melanie Turgeon where she also currently works as collaborative pianist for vocalists and instrumentalists. Ariane joined the Alberta College Conservatory of Music Piano Faculty in 2007 and was the adjudicator for junior piano at the St. Albert Rotary Music Festival in 2012. 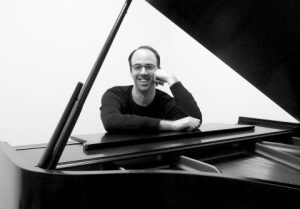 Kim Cousineau is the accompanist for both A Joyful Noise – thursday choir and wednesday choir. Kim received a Bachelor of Music degree from the University of Victoria, and studied privately with Anna Cal, student of Russian pianist Pavel Egorov. He worked as a répétiteur and rehearsal pianist for Pacific Opera Victoria on numerous productions, including Bizet’s Carmen and the world premieres of MacDonald’s Mary’s Wedding and Stokes’ Rattenbury. Kim has been involved in numerous musical theatre productions, including Candide and Baby (Opera Nuova), Bernarda Alba and The Light in the Piazza (MacEwan Theatre), The Drowsy Chaperone (Louis St. Laurent High School), and A Penny Saved (Acting Out Musical Theatre). He was a staff pianist with Victoria-based summer music programs In The Key Of Glee and A Voce Sola, and with Singspiration in Edmonton. Kim is in high demand as a choral accompanist in the Edmonton area, working with many groups including Concordia Concert Choir, Da Camera Singers, A Joyful Noise, Vocal Alchemy, Ante Meridiem, and Chronos. In 2012, Kim was the recipient of the BC Choral Federation’s Joyce O. Maguire Award for outstanding long-term service as a choral accompanist. He maintains a busy schedule as a collaborative pianist and coach and is currently on faculty at the Alberta College Conservatory of Music.